Hanukkah is one of the minor Jewish holidays. It doesn’t come from the Tanakh (Hebrew Bible) but instead from the book of Maccabees, which is from the Jewish apocrypha. These are a set of small books that were almost accepted as part of the Jewish Bible, but did not become canonized. However, they are still religiously and historically Jewish works of literature, and have a role in Jewish culture.

It refers to the joyous eight-day celebration during which Jews commemorate the victory of the Maccabees over the armies of Syria in 165 B.C.E. and the subsequent liberation and “rededication” of the Temple in Jerusalem. The modern home celebration of Hanukkah centers around the lighting of the hanukkiyah, a special menorah for Hanukkah; foods prepared in oil including latkes (potato pancakes) and sufganiyot (jelly doughnuts); and special songs and games. – ReformJudaism intro to Hanukkah

The Hebrew name Maccabee means “hammer”, and referred first to a leader of the revolt, Judas, the third son of Mattathias. His military attacks were said to be “hammer-like”. The name eventually came to be used for his brothers as well, which accounts for the title of the book.

Chanukah and the Bible

Chanukah comes from a book that almost made it into the Tanakh (Hebrew Bible), 1 Maccabees. It was written in Hebrew by a Jewish author after the restoration of an independent Jewish kingdom, in the latter part of the 2nd century BCE. The original Hebrew text was lost, but we still have the Greek translation in the Septuagint. For Jews this is part of the apocrypha.

The book of 1 Maccabees is held as canonical scripture by the Catholic, Orthodox, and Oriental Orthodox churches. Protestants consider it apocrypha.

Now it gets even more interesting: The biblical Book of Daniel was finalized just a few years before the Maccabean revolt (167 to 160 BCE) – the era of the Chanukah story!  Chapters 7–12 of Daniel reflect Judea in 167–164 BCE when Antiochus IV Epiphanes, the Hellenized king of the Seleucid Empire, threatened to destroy Judaism in the land of Israel.

The Lead Up to Chanukah in the Book of Daniel

Are there other reasons why this book didn’t make it into our Tanakh? The rabbis were not happy with the long-term outcome of the Chanukah story: Although The Maccabees were righteous and victorious, their descendants set up a kingdom which faltered through corruption a mere one hundred years later. The rabbis also disapproved of the Hasmoneans laying claim to both the monarchy and the High Priesthood.

Rabbi Joshua Yuter writes “The Maccabees are role models for fighting against tyranny, and a cautionary tale for when revolutionaries attain political power.”

Hanukkah marks the defeat of Assyrian forces who had tried to prevent Israel from practicing Judaism. Judah Maccabee and his brothers destroyed the overwhelming forces, and rededicated the Temple. The eight day festival is marked by the kindling of lights with a special Menorah, called a Chanukiah.

The prelude to the story begins in the reign of Alexander the Great, who conquered Syria, Egypt and Palestine, but allowed the lands under his control to continue observing their own religions and retain a certain degree of autonomy.

More than a century later, a successor of Alexander, Antiochus IV, was in control of the region. He began to oppress the Jews severely, placing a Hellenistic priest in the Temple, massacring Jews, prohibiting the practice of the Jewish religion, and desecrating the Temple by requiring the sacrifice of pigs on the altar.

Two groups opposed Antiochus: a nationalistic group led by Mattathias the Hasmonean and his son Judah Maccabee, and a religious group known as the Chasidim, the forerunners of the Pharisees (no connection to the modern Chasidism). They joined forces in a revolt.

The revolution succeeded and the Temple was rededicated.

According to a later tradition, at the time of the rededication, there was very little oil left that had not been defiled by the Greeks. Oil was needed for the menorah, which was supposed to burn throughout the night every night. There was only enough oil to burn for one day, yet miraculously, it burned for eight days, the time needed to prepare a fresh supply of oil for the menorah. An eight day festival was declared to commemorate this miracle.

Why is Chanukah held for 8 days?

Most people are familiar with the idea of the last vial of sacred olive oil, found in the liberated Temple, burning for 8 days, rather than one. The Talmud states that this is the reason that the holiday lasts for 8 days. But most historical sources show us a very different reason.

The legend of the oil lasting for 8 days comes from a much later time. The Book of Maccabees itself has a very different reason. During our war of liberation against the Hellenists, Jews were unable to observe the Festival of Sukkot. After the success of our revolution, the people held an 8 day festival to make up for missing Sukkot.  In fact, the holiday is first referred to as “Sukkot sh’b’Kislev” (“The Sukkot in Kislev”!)

As such, there were lulavim at the first Chanukah! We read in 2 Maccabees 10:7-9 RSVA

7. Therefore bearing ivy-wreathed wands and beautiful branches and also fronds of palm, they offered hymns of thanksgiving to God who had given success to the purifying of His own holy place.
8. They decreed by public ordinance and vote that the whole nation of the Jews should observe these days every year.
9. Such then was the end of Antiochus, who was called Epiphanes.

What are Chanukah and Christmas, and what are their themes?

Chanukah is a Jewish holiday commemorating the rededication of the Holy Temple (the Second Temple) in Jerusalem at the time of the Maccabean Revolt against the Seleucid Empire. (165 BCE.) At that time, Jews were crushed by an occupying army of Hellenistic Assyrians (erroneously called “The Greeks”, they were a part of greater Greek culture.) Under the evil Antiochus IV (Epiphanes), they outlawed Judaism. They sentenced to death people who studied Torah, kept kosher, or who circumcised their baby boys.

Chanukah is the story of a near-miraculous revolt against an anti-Semitic empire. With the victory of the Maccabees over the enemy, Chanukah became the first holiday of religious freedom.

The story of Christmas has it’s own meaning and message, and is not the Christian version of Chanukah. Christmas originally taught that all religions were incomplete: no human being could follow the Bible faithfully. As such, the classical Christian teaching was that every person would go to Hell, unless one accepts Jesus as messiah/God Himself.

Yet when you ask people today what Christmas is about, many say its about “Peace on Earth, and Goodwil towards all mankind.” Interestingly, this was never the message of Christmas, until Charles Dickens wrote “A Christmas Carol”.

See “The Man Who Invented Christmas: How Charles Dickens’s A Christmas Carol Rescued His Career and Revived Our Holiday Spirits Paperback” by Les Standiford

Christmas is about someone else (Jesus) forgiving you for your sins against others. In contrast, Yom Kippur (Day of Atonement) teaches that God forgives sins made against God, but if a person sinned against another person, then one must try to apologize and make it up to the other person. That’s the theology of Dickens.

Here is a resource for blessings, Ladino songs and a bumuelos recipe.

For Jewish families with younger children, “There’s No Such Thing as a Chanukah Bush, Sandy Goldstein,” by Susan Sussman and Charles Robinson

This classic holiday book tells the story of a little Jewish girl at Christmastime. It is her wise grandfather who helps her understand the difference between sharing something because she believes in it, and helping friends celebrate something because they believe in it. Recommended by the National Conference of Christians and Jews as “a story promoting brotherhood and understanding.”

Unequaled in-depth compilations of classic and contemporary writings [this has] long guided rabbis, cantors, educators, and other readers seeking the origins, meanings, and varied celebrations of the Jewish festivals…. biblical intimations of the festival, post-biblical writings, selections from the Talmud and midrashim, excerpts from medieval books, home liturgies, laws and customs, observances in different nations, stories and poems, art, and recipes.

“The Jewish Holidays: A Guide and Commentary” Michael Strassfeld

The Maccabeats – Hasmonean – A Hamilton Hanukkah. Originally by Lin-Manuel Miranda, this video by Uri Westrich.

Hanukkah and the Maccabees in Christian art & music

Many people today feel that the story of Hannukah is of concern only for the Jewish community. Readers may thus be surprised that historically it has been the Christian community which has read the book of Maccabees more often, and has been producing art, sculpture and music based on it. In every way, the story of the Maccabees is a part of Western Civilization through both Jewish and Christian culture.  In this article we take a look at the art, music, and sculpture of Hannukah. 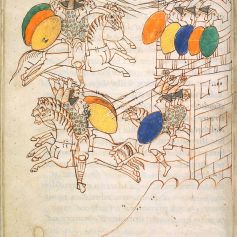 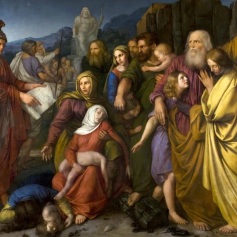 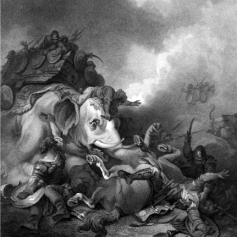 Eli Segal offers this fascinating article, “There is one exploit from the Hanukkah saga that has always captured my imagination with a special vividness. The heroic battle of Judah Maccabee against the Greek elephants at Beth Zechariah had all the vibrancy and spectacle of a technicolor epic.” – Eleazar Died for Our Sins, by Eliezer Segal

Rabbi Natan Slifkin offers this us this window into how Haredi groups accepted the historical legitimacy of the books of Maccabees, even though these books aren’t canonized as Biblical.

Kosher Certification for Maccabees. How did ArtScroll make the book of Maccabees kosher? 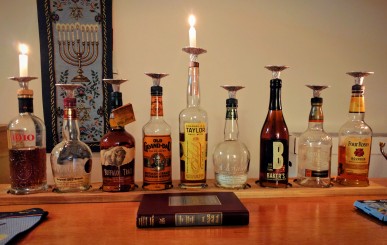 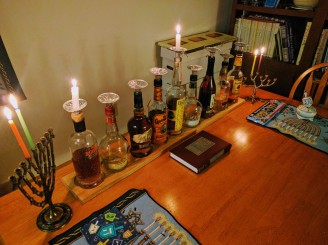 Why don’t Jews decorate for Chanukah in the same way that Christians do for Christmas?

Discussions over which stores have more prominent displays of Chanukah decorations. Expressions of anger and alienation that Chanukah isn’t acknowledged in stores. Feeling overwhelmed by the Christmas displays and Christmas music. Expressions of annoyance that we know all about their holidays but they try to sell us ham and matza on Chanukah. And the counter-comments, reminding people that Chanukah is a minor holiday on the Jewish calendar and that somehow, in America, it morphed into some kind of Jewish Christmas. As someone who has been living in Israel for the past seven Chanukahs, I’d like to make a few observation…

How is it really spelled?

Why write “Hanukkah” instead of “Chanukah” – surely one spelling is right and the other is wrong? The reason for the spelling confusion is the limitations of the English alphabet. Hanukkah is a Hebrew word (חנוכה)

That first letter, ח , has a guttural sound which used to exist in ancient English, but doesn’t exist in modern English. Technically, the modern Hebrew pronunciation of this letter is called a voiceless uvular fricative (/χ/)

H – Ḥanukah (notice the H with a dot under it.)