For any category, in general, what Jewish books should we have? 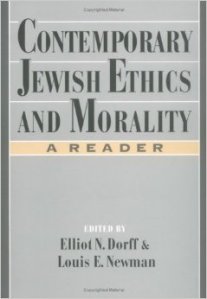 The publisher notes that “Over the past decade much significant new work has appeared in the field of Jewish ethics. While much of this work has been devoted to issues in applied ethics, a number of important essays have explored central themes within the tradition and clarified the theoretical foundations of Jewish ethics. This important text grew out of the need for a single work which accurately and conveniently reflects these developments within the field.”

[It presents…] “carefully organized recent essays on Jewish ethical theory and practice. Serving as an introduction to Jewish ethics, it acquaints the student with the distinctive methodological issues involved and offers a sampling of Jewish positions on contemporary moral problems. The book features work from both traditionalist and liberal contributors, making this the only volume which encompasses the full range of contemporary Jewish ethical perspectives. Writers such as Harold Schulweis, Judith Plaskow, David Novak, David Hartman, and Blu Greenberg discuss law and ethics, natural law, humility, justice, sex and the family, euthanasia, and other vital issues relating to modern Judaism. Many of the readings appear here for the first time, making this important text the most timely sourcebook in its field.”

The central legal body of Conservative Judaism – the Committee on Jewish Law and Standards – has issued a wide array of teshuvot (responsa) on bio-medical and bio-ethical issues. These learned and insightful papers provide us with a non-fundamentalist way to apply the resources of Jewish law and ethics to modern day dilemmas.
The book states that “In the Jewish tradition, the central means of addressing these concerns is through halakhah, or Jewish law. While the insights of halakhah are central to the lives of many Jews, these perspectives have also been found valuable by persons of other religious traditions and secular outlooks. This volume presents papers on biomedical ethics that integrate the resources of millennia with the most recent developments in medicine and ethical thought. The papers include some of the most thoughtful and important works in Jewish medical ethics on such issues as treatment decisions near the end of life, abortion, and reproductive technologies.”
The papers are presented in four general divisions, most of which are divided into a number of topical sections. Each section begins with an introduction summarizing the documents and highlighting points of special interest, including conclusions of practical application. The first division is “Responsibilities in the Creation of Life,” with sections discussing artificial insemination, in vitro fertilization, and surrogate motherhood. The second division, “Responsibilities for Fetal Life,” contains papers on abortion. The longest division is called “Responsibilities at the End of Life,” and its sections present extensive discussions of medical care at the end of life, shorter works reflecting on and developing these basic positions, and consideration of physician-assisted suicide and euthanasia. The final division, “Responsibilities for the Health Needs of Others,” addresses organ transplantation and autopsy, and new challenges involving genetic engineering, smoking, and responsibilities for providing health care.