The High Holiday Prayer Book”, aka the Birnbaum Machzor.

Known for it’s clear translations and helpful introduction and footnotes. From the 1950s until the close of the 20th century it was the standard in most Modern Orthodox and many Conservative shuls. It was published in two editions: One edition has separate volumes for Yom Kippur and Rosh HaShanah, while another has both in one volume.

Ed. Jules Harlow, published by the Rabbinical Assembly. The official mazhor of the United Synagogue of Conservative Judaism (single volume.) The text is mostly traditional, but references to the Temple and animal sacrifices have been significantly modified so that the text recalls the glory of the ancient Temple service: it stresses that in our day it is ethical living, following the will of God, and repentance that bring salvation, not animal sacrifice. There are a number of English and Hebrew egalitarian innovations. It has less Ashkenazic piyuttim than other machzorim, but it includes a selection of religious poetry from the Sephardic rite, as well as from some ancient machzorim.

Used in Modern Orthodox and Yeshivish (Haredi) synagogues. Sold as a two volume set, one for Rosh HaShanah, and one for Yom Kippur.

A best selling mahzor, like all Artscroll prayer books, it has excellent notes, and is more comprehensive than most Conservative or Modern Orthodox mahzorim, in the sense of adding the most additions from the medieval era up until the 1800s. It is less complete, in the sense of not including prayers from the last century, including those for the State of Israel, or those which recognize women as full and equal members of the congregation.  It includes a lot of lesser known prayers and piyuttim (religious poetry), and info on special customs and observance. The commentary is from a right-wing Orthodox point of view. I personally own several Artscroll books, and if one is aware of their non-historical bias, they can be surprisingly good . 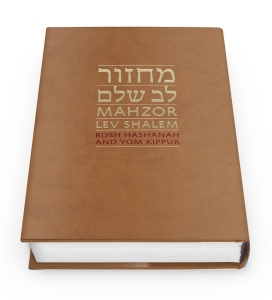 About once a decade a major new edition of the mahzor – the prayerbook for the Jewish high holy days – comes out. Orthodox mahzorim tend to be “complete”, in the sense of having as many prayers from disparate Jewish communities across Europe as possible – as long as only prayers written before 1700 are concerned. They also tend to ignore half of the Jewish community (women!), the emergence of the State of Israel, or allow for much in the way of new liturgy in the past couple of centuries (despite the fact that the traditional, historical Jewish practice was to constantly add new prayers, and occasionally remove older ones.)

In the early 1970s Rabbi Jules Harlow, of the Rabbinical Assembly, edited the now common “Mahzor for Rosh Hashanah and Yom Kippur.” Freeing itself from Orthodox constraints, it removed many old prayers that were felt to be outdated (which has its advantages and disadvantages) and allowed for the addition of newer material. There was little commentary or instruction; instead, the editors focused on the translation, feeling in most places it would be sufficient. It has somewhat fewer poems than other traditional and conservative machzorim. The translations are more poetic and less literal.

However, the Rabbinical Assembly in 2010 published a totally new replacement “Mahzor Lev Shalem.” This new Mahzor presents a complete liturgy, restoring many traditional prayers that had not been included in the Silverman or Harlow editions of the mahzor, yet it also offers options to use the creative liturgical developments presenting the theology and gender-equality of non-Orthodox Judaism. It contains a variety of commentaries from classical and modern-day rabbis, gender-sensitive translations, and choreography instructions (when to sit, stand, bow, etc.)  It offers more literal translations of the prayers than previous non-Orthodox mahzorim. English transliterations are offered for all prayers and lines recited aloud by the congregation. The page layout surrounds prayers with a variety of English commentaries and readings, as one finds in classical rabbinic commentaries. In a first, this book was designed to be used by Conservative, non-denominational and Traditional-Egalitarian synagogues and chavurot. By leaving out certain texts and choosing other included options, it also can be used in Modern Orthodox or Reform congregations. Truly a masterpiece, I hope this finds a place in the pews of synagogues of all denominations.

Availabe in nusah Ashkenaz or Sepharad.

Translation and commentary by Rabbi Lord Jonathan Sacks, former Chief Rabbi of the United Kingdom. Together these two volumes are the first unapologetically Modern Orthodox prayerbook for the high holy days printed in 60 years, and a modern, Zionist rebuke to the more Haredi ArtScroll Mahzor. It is the companion to the increasingly popular Koren Sacks Siddur. From Koren Publishers Jerusalem; Hebrew/English edition.

Many people often find that the prayers and observances are not as meaningful as they would like. As such, reading one of these books will change your way of viewing the High Holy Days, and will make the services both meaningful and spiritual.

Describes every prayer in each prayer service including Shacharit (morning), Musaf (additional service), Minchah (afternoon), Maariv (evening), Tashlikh (ceremony of casting away sins), Selichot (penitential prayers), Yizkor (the Memorial of the Departed), and Neilah (“the closing of the gates”). For each prayer, it explains their historical origin and spiritual meaning. 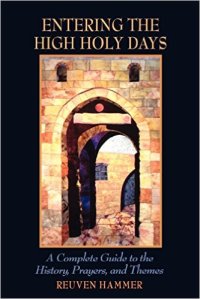 Provides all the needed historical background to understand the meaning and composition of the service. Describes and interprets the ideas, practices, and liturgy that lend them contemporary relevance to today’s Jews.

The Talmud says that the very first question each of us will be asked when we are called to account is: “Were you honest in business?” According to Judaism, prosperity, like happiness, is a beneficent side effect of the pursuit of justice. Jewish business ethics therefore call for the most scrupulous honesty and the most exacting standards of fairness; one’s purpose is not to “die with the most toys” but to conduct one’s affairs in a just manner.

Here Meir Tamari (author of _The Challenge of Wealth_ and _With All Your Possessions_) provides an informative sampling of excerpts from traditional Jewish texts, interspersed with his own commentary, elaborating on thirteen major types of “business sin.” The resulting volume is helpful both for those reflecting in preparation for Yom Kippur and for those looking for a somewhat in-depth introduction to Jewish business ethics in the words of the Tradition itself. (It should also make a nice companion to Tamari’s other works.) As such it should be of interest to anyone wanting to learn more about a crucial area of Jewish ethics.