In the Torah, there are more commandments concerning the kashrut (fitness) of one’s money than the kashrut of food. Exhortations on ethical business practices are a common theme from the nevi’im (Biblical prophets.) These ideas are expanded upon in classical rabbinic literature, the responsa literature, and all the codes of Jewish law.

Judaism teaches that it is a sin to illegally obtain government benefits. This is a violation of the Jewish principle of dina de’malkhuta dina – The secular law of a country is just as binding as Jewish law. (Talmud Bavli, Bava Batra, 54b)

Leviticus 19:35,36 reads “Do no wrong in judgement of length, of weight, and of volume. You shall have just scales, a just epah (unit of dry weight), and a just hin (unit of liquid measure), for I am the Lord your God who brought you out of the land of Egypt” 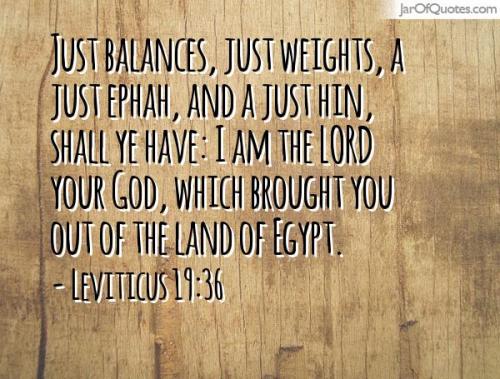 The rabbis taught us that the above verse mentions ‘judgement’ here because the person who measures is called a judge, and if he is dishonest in his measure, it is as though he has perverted judgement, and he is called twisted and an abomination….

And the rabbis further enhanced the seriousness of this commandment, saying that its punishment is greater than that for forbidden sexual relations, because this act is only between a person and God, while using dishonest weights and measures is between man and his fellow man [as well as being a violation against God]. Sefer HaChinukh, mitzvah 258

Mafkia Mechirim – Meir Tamari describes this as a prohibition against price gouging.

In the Shulkhan Arukh, this sin is categorized as a form of mekakh t’aut (fraudulent sale).

In price gouging, someone takes advantage of someone to sell them a good for far more than its fair market value, a deviation from Jewish norms.

Concerning one who raises his prices [in great excess above normal profit, or fair market price], the Bet Din [Rabbinical court] has permission to inflict punishment as they see fit….One who exploits the pricing mechanism [of basic goods in times of shortage] or hoards produce in the land of Israel or where there is a Jewish majority is regarded as a moneylender [who refuses to grant interest-free loans as an act of charity]. Shulkhan Arukh, Choshen Mishpat, sec. 231, subsections 2 and 25.

Meir Tamari writes “Theoretically all parties to a transaction are considered to be equally well informed and fully knowledgeable about all the defects and risks, If one party does not fully disclose, or even conceals such defects, the other parties are expected to make the effort to find out all the facts relevant to the transaction. In real life, however, one party, usually the seller of the goods or services, has superior knowledge regarding the true price, quality and quantity of goods or services. It is often relatively easy to conceal or distort such knowledge, thereby causing loss and damage to the other party.”
– Tamari, p.67

Rabbi Yisrael Salanter, founder of Mussar movement in the Eastern European yeshivot of the nineteenth century, taught that just as one checks carefully to make sure their food is kosher, so too should one check to see if their money is earned in a kosher fashion. (Chafetz Chaim, Sfat Tamim, chapter 5).

If one makes use of [lit. ‘clothes himself in’] the Torah knowledge of someone else, and does not reveal the source [of this knowledge] then he is a thief. This is so even if the original author does not lose anything [such as potential royalties or profit from sales] while the thief has benefits. One is not allowed to benefit from another’s property without his permission, except when the owner does not mind. However, there is nobody who does not value the creations of his mind and does not wish that another, who did not labor for it, should profit from his work, so this is robbery.

This occurs whenever one exploits other’s ignorance of market conditions, or their physical, psychological or financial distress. This category of sin includes overcharging, as ell as withholding wages or payment due (ona’at mamon).

The Shemitah [Biblical seventh year which lifts certain debts] and Yovel [The Jubilee year] introduce the concept of God into all the business transactions of man, and make it clear that all must live and work together on the one soil of God, in the land of Israel..and where..God expects us to pay homage to Him in all our transactions. The obvious corollary to this idea – that all communal life takes place before the eye of God – is that God is present not only in the Temple but also in the midst of all business and commercial transactions.
Samson Raphael Hirsch on Lev. 25:17.

Employers, senior executives, managers and others in authority can harass, embarrass or exploit other people. “It is in their power to inflict economic loss on others through dismissal, and job transfer to less desirable locations or jobs. Price exploitation affects only the material welfare of others, but verbal exploitation (Ona’at devarim)…affects their very souls. [Tamari, p.85]

Michshol Lifnei Iver: A stumbling block in the path of the blind.

Our sages extend this term to refer to any case where hidden agendas – such as conflicts of interest – exist. This sin includes any acts that may be technically legal, but present moral problems.

This concept extends to the full disclosure of all material considerations about advice given by bank officials, accountants, lawyers and financial analysts. This aspect of lifnei iver is probably more important today than ever before in human history.

Lifnei Mishurat Hadin – Going beyond the letter of the law.

We are expected not only to act in accordance with Torah and secular law at all times, but also to make certain that they conduct all their commerce in righteousness.

If a person is hired to perform in some job, and in the course of his work causes a loss to the employer even if it be through negligence in such a way that he is legally responsible for the damage incurred, it is a mitzvah (in this case, a moral duty) for the employer to act beyond the literal application of the law (lifnim Mishurat Hadin) and to refrain from collecting damages for it is written: “…so that you may go in the way of goodness” (Proverbs 2:20) If the employee is a poor person, it is a mitzvah to pay him his wages for that job (on which the loss or damage was sustained). This is the way of righteousness and justice, lifnim mishurat hadin. (Donin, p.55)

Dina DeMalkhuta Dina – The secular law of the country is just as binding as Jewish law.

“Shmuel said ‘The law of the land is the law’. This means that all the taxes, levies and regulations which the king [or other legitimate ruler] institutes in the kingdom become law halakhically.” [Talmud Bavli, Bava Batra, 54b, commentary of Rashbam]

That the law of the land is ‘din’ (Jewish law) means that all those involved in the marketplace may operate on the assumption that the same rules are being observed by all the other players. If there is a state law against insider trading or regulations providing for full disclosure of prices…then such regulations become halakhically mandantory. One who does not fulfill them in his business operations…transgresses Torah law. [Tamari, p.157] This is especially true for any form of tax evasion:

One who evades the taxes and import duties which the King has levied robs the portion of the King, irrespective of whether he is a Jewish King or gentile ruler, because the law of the king is law.

The prinacy of a debtor from a creditor

“The Kabbalah of Money: Insights on Livelihood, Business, and All Forms of Economic Behavior” by Rabbi Nilton Bonder, Shambhala, 1996.

“The Challenge of Wealth: A Jewish Perspective on Earning and Spending Money” by Meir Tamari,Jason Aronson, Inc, 1995.

“You Shall Strengthen Them: A Rabbinic Letter on the Poor.”
Rabbis Elliot N. Dorff, Lee Paskind and Debra Orenstein
The Rabbinical Assembly and United Synagogue of Conservative Judaism, 1999