According to many traditional rabbis, there is a prohibition against hearing a woman’s voice during prayer – But is this really so?

First, let’s look at a summary of the subject from the Encyclopaedia Judaica:

Since women in fact did not participate in the set daily prayers, it eventually became accepted halakhah that the obligation to pray did not apply to them in the same manner as it does to men. Thus the argument against permitting woman to read the Torah in public (aliyah la-Torah) contended that women may not discharge of obligation of Torah reading on men’s behalf. The main traditional reason against women being called to the Torah reading (aliyot) is that it is a disgrace for the congregation: “Our rabbis taught: all are qualified to be among the seven (who read the Torah) even a minor and a woman, but the Sages said that a woman should not read because of the esteem of the congregation (kevod ha-zibbur)” (Megillah 23a).

Some authorities have understood this passage as literally suggesting that women’s participation in aliyot casts shame on the males in the congregation who might be presumed too ignorant to read the Torah (that is, recite the blessings). For otherwise, why would men let women who are at least implicitly seen as “second best” read for them? Others have interpreted the term “kevod ha-zibbur” as an allusion to the sexual distraction posed by women reading the Torah. This interpretation links the issue of reading the Torah to the separation of men and women in the synagogue by way of a mehizah (partition) and to the dictum “(hearing) a woman’s voice is an ervah” (a sexual transgression; Berakhot 24a)”

However, this understanding of the issue is rejected by both some Modern Orthodox rabbis, and all Conservative rabbis. JTS Talmud Professor Judith Hauptman points out the following:

Another argument that one could raise against having a woman serve as prayer leader is that her voice would distract men from prayer rather than help them focus on it. The prohibition referred to is the Talmudic phrase, “kol b’ishah ervah,” which means that a woman’s (singing) voice is sexually arousing.

However, this phrase, as used in Berakhot 24a, the only time that it appears in the Talmud in a halakhic context, (46) is invoked to stop a man from reciting the nighttime Shema while hearing his wife’s voice as they are preparing for bed. (47)

I think it is clear that the principal occasion that the Talmud had in mind for banning a man from hearing a woman’s voice was an intimate one, a time when hearing her voice, like seeing an exposed part of her body, was likely to distract him from pondering the meaning of Shema.”

“The strongest proof of the limited Talmudic application of “kol b’ishah” is the Talmud’s own statement that women are halakhically qualified and would be permitted to read from the Torah in public, were it not for the dignity of the congregation. (48)

Were hearing a woman’s voice reading sacred Scripture in a public, liturgical setting a problem of kol b’ishah, the gemara certainly would have said so. Similarly, as noted above, there are a number of authorities who hold that a woman is obligated to hear the megillah read, just like men, and can therefore count in the minyan and read for the entire minyan, men and women alike. Again, were kol b’ishah relevant, permission of this sort would not have been extended to women.

And finally, when asking if a woman can recite Grace for a man (Berakhot 20b), the only issue raised by the gemara concerns the relative levels of obligation of women and men. That would be moot were kol b’ishah relevant.”

“Some thoughts on the nature of halakhic adjudication: women and minyan”, Judaism: A Quarterly Journal of Jewish Life and Thought, Fall 1993 v42, n4 p.396< 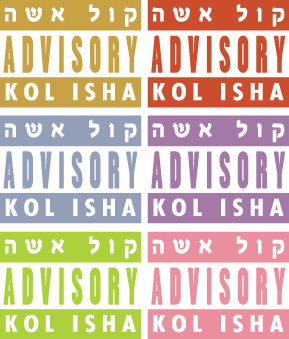 (46.) See parallel texts in Kiddushin 70a-b and J. Hallah 2:1. It is not evident that the voice referred to is necessarily a voice of song.

Maimonides, basing himself on the Talmud, comments (Hilkhot Tefillah 3:18): “Two who are sleeping in one tallit may not recite Shema … unless a tallit separates the two of them so that their bodies do not touch from the hips down. But if someone were sleeping with his wife or small children, their bodies are like an extension of his own and he will not notice them (v’eyno margish meihen). Therefore, even if his body touches theirs, he averts his face … and recites [Shema].” Note that several paragraphs earlier (3:16) Maimonides says that a man may not see any exposed part of a woman’s body, even his wife’s, while reciting Shema. Hagahot Maimoniyot comments (ad locum, note samekh) that if a man were to hear a woman’s voice that he recognizes while reciting Shema, it would not fall under the ban of kol b’ishah.

(48.) See Mordecai (Gittin 5:404) who suggests that when there are only kohanim available to read from the Torah, women should read from the third aliyah to the end. He says it is better that the dignity of the congregation be compromised by having women read than that a kohen cast aspersions on his lineage by reading beyond the second aliyah. If hearing a woman’s voice were a problem, it is hard to believe that he would have ruled that way.

See Weiss, Op. cit., p. 70, n. 10, and all the sources that he cites, in particular the article by Saul Berman, entitled “Kol Ishah,” in the Rabbi Joseph H. Lookstein Memorial Volume, Leo Landman, ed., (NY: Ktav, 1980), pp. 45-66. See also Ellenson, Op. cit., vol. 2, pp. 81-91, for a wide variety of sources on the subject of kol b’ishah, most of which rule stringently. The rubric under which Ellenson groups these texts is “hearing a woman’s voice in song.” See, in particular, the comments of R. Yehiel Weinberg, pp. 87-89, who says: “In these countries (of Western Europe), women feel insulted and their rights diminished if they are forbidden to participate in singing zemirot at a Shabbat celebration. … This might ultimately lead to alienating them from Judaism.” Note that this concern was also key to the rabbis permitting women to study classical Jewish texts. See n. 55 and the text ad locum; see also n. 60.

Orthodox Judaism, as a whole, has not adopted the position of the Conservative movement. Nonetheless, there have been a spate of Orthodox rulings on kol ‘isha that are ever more lenient, to the point of nearly removing this supposed prohibition altogether.

Here a growing number of Orthodox rabbis flatly dispense with the urban myths surrounding this issue, and pasken (halakhically rule) that men and women may sing together, even within Orthodox standards of halakhah.

A New Hearing for Kol Ishah

Here is another example of Orthodox rabbis removing most of the misunderstandings about Kol Isha:

Yet, recently two rabbis in Israel who I admire a great deal: Rav David Bigman, Rosh Yeshiva of Maaleh Gilboa (where I studied), and Rav Moshe Lichtenstein, Rosh Yeshiva of Yeshivat Har Etzion, have both independently written that the prohibition of Kol Ishah should be understood in a much more limited fashion.
Their opinions are based upon the writings of great medieval authorities like Raviah, Mordechai, Tosafot Ri, and even in the writings of some modern day chareidi rabbis like the Sereidi Eish and Chazon Ish. (Rav Bigman’s responsum can be seen here:http://www.jewishideas.org/rabbi-david-bigman/new-analysis-kol-bisha-erva; Rav Lichtenstein’s was published in Techumin 32, 5772, and was shown to me by R. Dov Zakheim. The relevance of the Chazon Ish for a permissive pesak can be seen in R. Berman’s article, p. 65.)

Here is what Rav Bigman writes:
There is no prohibition whatsoever of innocent singing; rather, only singing intended for sexual stimulation, or flirtatious singing, is forbidden. Although this distinction is not explicit in the early rabbinic sources, it closely fits the character of the prohibition as described in different contexts in the Talmud and the Rishonim, and it is supported by the language of the Rambam, the Tur, and the Shulchan Arukh.

While Moshe Feldman (Vol. 24 #90) is correct in saying that textualism
does not by definition mean ” a move to the right”, in reality and from
a practical point of view, it does. In many instances, the so-called
“right wing” uses text to justify their positions, or if the text is at
odds with their world view, ignore it as a “kulah” (leniency). This in
turn leads to the making of yestedays extreme practices into todays
minimal standards.

There is no question that certain practices of earlier generations were
flat out wrong halachically. No halachic authority condoned working on
Shabbat, for example, despite the fact that many people did so. Working
on Shabbat out of a perceived necessity was never part of any mimtic
tradition.

So too, in the areas of tziniut, the mimetic tradition never accepted
the genrally sexually explicit and sexually provocative culture and
attire of the 20th century. But was “kol isha”, for example, ever an
accepted tziniut norm prior to the triumph of the Yeshiva over the
community? From 1964 until approximately 1995, Camp Morasha, YU’s
affiliated camp, had no problem with kol isha in the camp’s singing and
other performances. Now that has changed. Were all the Rabayim over 30
years on their staff just plain wrong and have only recently become
enlightened? Don’t forget that kol isha is apparently an issue of
ervah, serious stuff. And this is the last 30 years, not the so-called
halachically challenged era before World War II.

I am the son of a Rav, and can remember going to Rabbinical Council
conventions with my parents in the 50’s and 60’s (anyone remember the
old Pine View Hotel in the Catskills?) where the swiming was mixed, in
the presence of some of the greatest of the American Orthodox rabbinate
in attendance. And yet today, mixed swimming is one of the litmus tests
of a “frum” Jew.

Moshe mentions the Jewish community of Hartford, where is father grew
up. I am also familiar with that and similar communities. In the 50’s
Hartford had a thriving Jewish community (still does) with a number of
kosher butchers, not one of which sold “glatt” meat ( a standard
practically unheard of in the US until the 2nd influx of Hungarian Jews
after 1956). Additionally, at that time, a large segment of the
Torah-observant community used electricity on Yom Tov (apparently an
opinion with antecedents in the Aruch Hashulchan). Today, glatt meat is
the only standard, and no one turns on the lights on Yom Tov. These
areas have nothing to do with 20th century secular morality, and yet
there they are, chumrot becoming normative.

So, what do I perceive is going on? Instead of mainly educating our
children, parents teaching and showing their sons and daughters, witn
the Yeshiva a place for the advanced scholars, we have abdicated the
educational responsibility to a universal Yeshiva education (including
the now almost obligatory post high school two years in Yeshiva in
Israel), homogenizing our children into one uniform halachic thought
pattern, completely abandoning minhag avotaynu (the family traditions).
Since the education is the universal standard, the advanced scholar who
could appreciate the subtelties and nuances of halacha, using a
balanced approach, is rarely allowed to develop. If one doesn’t have
the ability to grapple with the text and tradition, well, there’s
always Artscroll’s instant halachic capsules to spoon feed you the
“correct” answer. And that, to my way of thinking, is a tragedy.