For any category, in general, what Jewish books should we have?

Maimonides on the “Decline of the Generations” and the Nature of Rabbinic Authority (SUNY Series in Jewish Philosophy) Menachem Marc Kellner, 1996 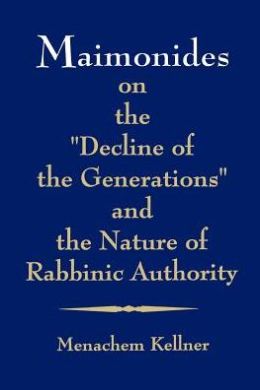 Like all of Professor Kellner’s works, this is a cogent and well-written argument. Using a wide array of Maimonides own writings, Kellner logically follows Maimonides’ lead to his logical conclusion. Many Haredim (Ultra-Orthodox Jews) are unhappy with his work, but Kellner’s scholarship is highly respected within the academic community, Modern Orthodox Judaism, and by non-Orthodox Judaism.

From the publisher “Moses Maimonides, medieval Judaism’s leading legist and philosopher, and a figure of central importance for contemporary Jewish self-understanding, held a view of Judaism which maintained the authority of the Talmudic rabbis in matters of Jewish law while allowing for free and open inquiry in matters of science and philosophy. Maimonides affirmed, not the superiority of the “moderns” (the scholars of his and subsequent generations) over the “ancients” (the Tannaim and Amoraim, the Rabbis of the Mishnah and Talmud) but the inherent equality of the two. The equality presented here is not equality of halakhic authority, but equality of ability, of essential human characteristics. In order to substantiate these claims, Kellner explores the related idea that Maimonides does not adopt the notion of “the decline of the generations,” according to which each succeeding generation, or each succeeding epoch, is in some significant and religiously relevant sense inferior to preceding generations or epochs.”

Historicism, the Holocaust, and Zionism 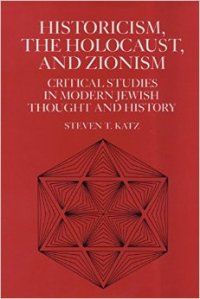 Gersonides on Providence, Covenant, and the Chosen People

A Study in Medieval Jewish Philosophy and Biblical Commentary

Levi ben Gershom, better known as Gersonides, or the Ralbag, isn’t an easy philosopher for moderns. Very few of his works have modern translations, and those that do exist are of little help to those without at least some background in medieval philosophy.
For those of us who are interested in the radical theological innovators of the medieval era, such as Gersonides and Maimonides, it is helpful to have a guide such as Eisen’s book to guide us through Gersonide’s arguments. It is concise, well written, helpful, and does not make the mistake of talking down to the reader. A certain amount of intellectual sophistication is assumed on the part of the reader – but I assume that this would be true of anyone who wishes to read Gersonides to begin with! For further reading, I would suggest any of the many journal articles by Menachem Kellner.

Must a Jew Believe Anything? Second Edition with a New Afterword, Menachem Kellner, 2006