Thoughts on the Notre Dame Cathedral

On Monday April 18th, 2019, the world famous Notre Dame de Paris Cathedral in France caught fire. Although most of the stone superstructure is still intact, all of the woodwork has burnt. 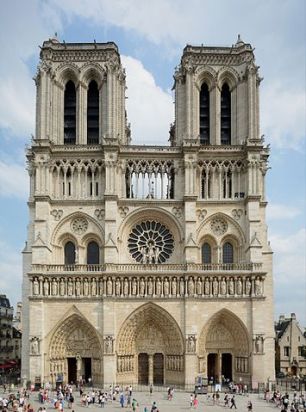 There was devastating damage, and the French people are mourning for their collective cultural loss. We in the Jewish community share their pain. We know all too well what it is like to see our own synagogues burn in flames. We stand with those in pain, with those who feel loss.

At the same time, note that not all Europeans have the same relation to the cathedral. There is much history which tour guides do not mention. As such we are offering an essay to open a conversation about the experiences of other people with the Notre Dame Cathedral.

What to do when your heart pulls you in the opposite direction of your mind?

Your heart wants to cry with your Christian brethren who are witnessing the destruction of one their most sacred sanctuaries, but your mind refuses to forget what it was like to stand in front of that cathedral several years ago, while France was in the throes of violent nationalistic passion.

Several years ago we decided to visit Paris for a few days. Before we left, friends warned us about French antisemitism. It turned out that their fears were unfounded. In the ten days we were there, nothing happened. We didn’t encounter antisemitism once—even though I was walking around with a kippah.

While we didn’t experience antisemitism, we still encountered immense hatred—during the half hour we stood in front of the Note Dome cathedral. That was extremely difficult.

As we were standing there, contemplating the building’s majesty, the supersessionist ecclesia synagoga sculptures, which celebrate the fact that Judaism has been superseded by Christianity, were staring back at us.

No matter how hard we tried, we couldn’t avert our eyes from the competing sculptures, contrasting beautiful ecclesia (Christianity) with wretched synogoga (Judaism).

The magnificence of the cathedral looked small relative to the pain-filled story told by these two sculptures. The hateful images made an indelible impression. Now they are coming to the fore.

The raging flames make you cry, your eyes fill with tears, but, at the same time, your minds eye sees itself once again being stared down by those cruel sculptures, and it too fills up with tears.

Rabbi Katz is chair of the department of Talmud at Yeshivat Chovevei Torah, a Modern Orthodox yeshivah and rabbinical school in New York City.
___________

For Jews, the burning of the Talmud is one of the painful memories in our collective history. What happened in France then was repeated continually thereafter, in Poland, German, Austria, even as recently as when Palestinians burned all the books in the Yeshivah, Od Yosef Chai, which was in Joseph’s Tomb, one of Judaism’s holy sites in Shechem (Nablus.)

King Louis IX of France stole every volume of the Talmud, all handwritten, from the Jews of France. In 1242 had 24 cartloads worth of Jewish books burned in the square in Paris. For his efforts, the Church canonized him as a saint in 1297.