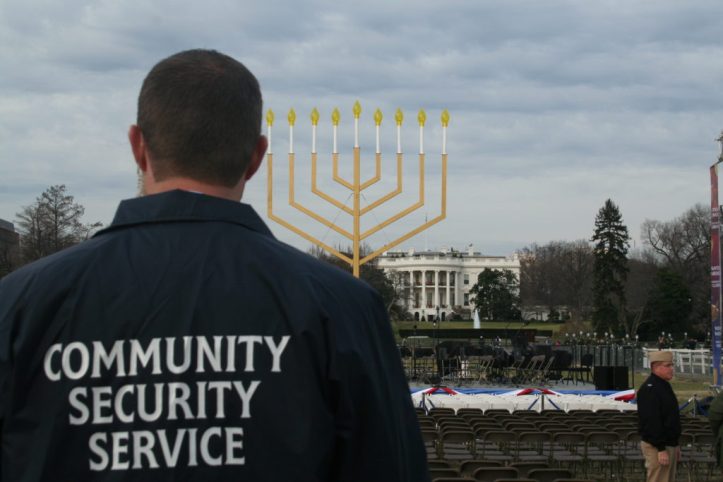 Threats to Jewish people are significantly increasing. Antisemitic attacks, threats and incitement have been on a rise throughout the United States, Canada, the UK, and across Europe. The recent mass murder at Tree of Life in Pittsburgh, PA reinforces the need for us to reconsider and substantially enhance our traditional security measures.

What security measures are congregants asking for, and which are likely to be most effective?

Metal detectors at doors are a great idea.

Asking for more police drive-bys can’t hurt, but it may have little protective effect.

Security cameras are not as helpful as most people think. They only rarely provide info that prevents a murder. They usually only help provide evidence to charge a murderer with a crime, after the shooting has ended.

Many security experts thus tell us that synagogues should always have a couple of licensed, trained, armed members at every single Shabbat and holiday service. Yes, this means people carry loaded, concealed weapons.

This should be done in careful, informed manner. Synagogues setting up this kind of enhanced security should cooperate with security experts on the national level, local gun owning members, and the local police.

Security cameras, prayers, and tears won’t stop a gunman entering our sanctuary with a rifle. Only a person in the room can do so.

Please read carefully – what I am writing here is nuanced, and not related to any political view. Having a couple of people who are licensed and trained to carry firearms, is a moderate, sensible policy. It is non-political, and already accepted in many communities.

In the wake of over 160 antisemitic attacks against Jews in NY alone in the last 2 years, and an attack every day in the last two weeks, including two terrorist attacks, we need to make sure that any of our events are safe As such, I wanted to share these ideas on how to protect ourselves at these events. These are from an Israeli counter-terrorism expert, Yael Shahar.

In the wake of the horrific attack on Jews in Monsey, New York this week, following a slew of previous antisemitic attacks, my feed is full of posts suggesting that it’s time for Jews to take responsibility for their own safety. Suggestions range from “Jews should take self-defense training” to “Shuls should have armed guards”. But by far the most common suggestion is for members of synagogue to come to shul armed. So here is a general response written under my “other” hat, that of veteran of various security services:

1. A handgun is no match for a rifle in terms of stopping power or accuracy. Professional security people train long and hard just to avoid friendly fire instances in a firefight. It is doubtful that most armed congregants will have that kind of training. I can think of nothing worse than a number of people armed with handguns all opening fire in a crowded space.

2. Given that reality, it is preferable to have one or two people with appropriate weapons,whose job it is to stand guard during services, and to monitor entrances.

These people should undergo frequent proficiency training, so that in the event of an emergency they will be part of the solution, rather than part of the problem. Their whole attention should be on providing security, not on taking part in services.

3. Prior to services, the security team should do a walk-through of the premises to make sure there are no unauthorized people present. Once services start, all doors should be either locked or manned by a security guard. Windows overlooked from nearby buildings should be opaqued or provided with appropriate hardening.

4. After services, the security team should do an overview of the exit areas, looking for anyone suspicious, anyone sitting in a parked car waiting for services to let out, that kind of thing. People exiting services are likely to be the weakest point, assuming that access to the building during services is denied.

5. Ideally, every place of worship should have a professional threat assessment carried out, identifying vulnerabilities and matching those vulnerabilities with the capabilities of potential attackers to point out how best to allocate security funds.

It does little good to put one’s security budget into preventing car bombings when the most likely attacker is going to be a shooter masquerading as a visitor or someone breaking in with a machete.

(Full disclosure: I’m currently part of an organization of former security professionals who do threat assessments at cost for places of worship. We use the same algorithms as those used by Israeli counter-terrorism services to secure Israeli venues abroad. )

Congregants didn’t act as victims. They fought back.

A survivor of the NY Hanukkah stabbings smashed a table into the attacker’s face. That’s not all